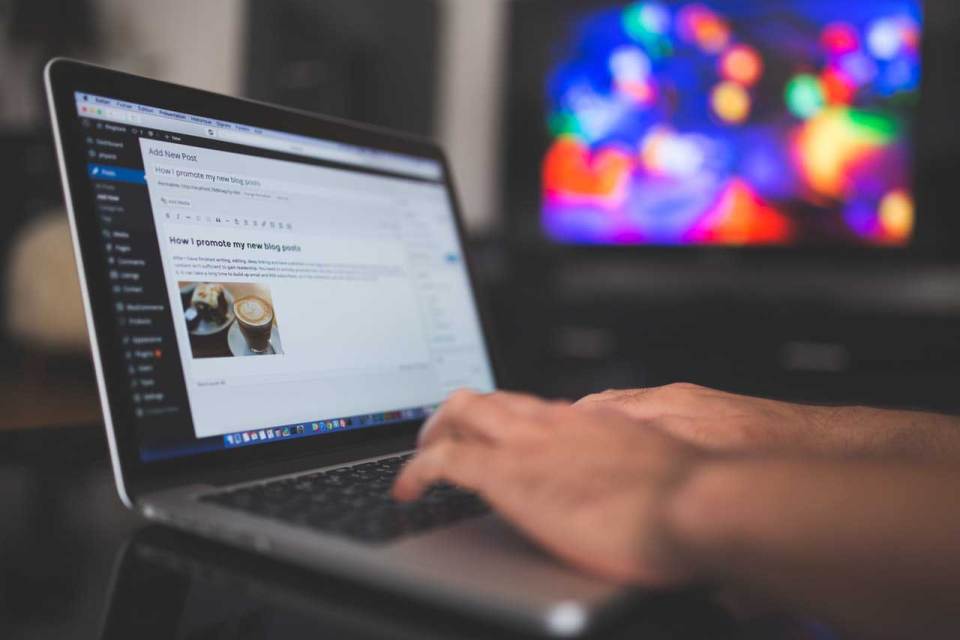 Over the past year, I’ve made a determination to make this blog my full-time income.

I’m hoping to make it a very large income at that. In fact, my goal is to get this website, Prosperopedia.com, to a level where it’s netting over a million dollars per year. You’ll often hear folks refer to the $1M+ threshold as a seven-figure income, a term that comes from the fact that there are 7 digits in the number $1,000,000. The trick to making a seven-figure income is to make sure that the first of those digits is greater than zero. As most people who have tried, including the majority of those who have succeeded can tell you, it’s not easy.

Is it even possible to make that much income through blogging? The answer is a definite yes. It’s been done by lots of people. I’m going to introduce you to several of them. I’ll also detail how they managed to get from starting on the idea to write their thoughts and opinions and publish them on a website to collecting seven figures’ worth of checks over a 12-month period. I’ve followed several bloggers in their

What is my plan for getting to a seven-figure income with just a simple website, a bunch of pictures and words put together in a way that provides significant value?

I’m going to write, and write, and write…and publish, and publish, and publish…until I’ve written enough useful articles, how-tos, opinions, news updates, etc. that I can prove to Google that there are good reasons to send a decent portion of its users to my domain, and I’m going to figure out how to best monetize those interactions by displaying relevant ads, product offers, and affiliate relationships. For me, the process is pretty straight forward, although certainly time consuming. I have to brain dump the stuff I already know, and I have to learn new things that I can also write about.

In addition to writing articles, which I’m much better at than the social media stuff, I’m going to build an audience of hundreds of thousands of somewhat like-minded (positive, somewhat religious, improvement-focused) people on social media accounts built to promote the Prosperopedia brand through Twitter, Facebook, Instagram, Pinterest, YouTube, and whatever else comes along that seems like it makes sense to use.

You’ve probably heard that Super Bowl ads cost a lot of money. 30-second ads for Super Bowl LIV in 2020 are going for more than $5 million.

That’s a cool $5 million to show your product, service, or whatever message you want to get out to the world.

Why does it cost so much?

Because the number of people who watch the Super Bowl exceeds 100 million. Having access to those 100 million people for even 30 seconds is worth the ad spend for companies that have the budget and want to reach that audience.

The same kind of numbers are at play when it comes to directing online traffic. In fact, Google’s ad revenue for 2018 surpassed $116 billion. Bing (a distant second in search engine market share) has ad revenues close to $8 billion last year.

If Google and Bing can net over $120 billion in ad revenue in a year, revenue collected from advertisers who pay for both impressions (when ads are shown on the search engines’ partners’ websites) and ad clicks, there’s quite a bit of opportunity for hundreds of bloggers to net $1M or more in a year on the traffic they attract from organic traffic that comes to them from search engines.

Some of the bloggers I’ve followed, especially ones who make some portion of their blogging income teaching other bloggers how to make similar amounts of income (which kind of feels like an MLM, but it’s a bit different since there are no downlines and you don’t have to make your friends hate you to be a blogger), are kind enough to publish their blogging income numbers online. Some bloggers give highly detailed reports about exactly where there income comes from and what expense they incur to create that income. Others simply point out that they make over $1M in a year on their blogs.

I’ll share with you the details about a few bloggers of the seven-figure income bloggers I’m aware of, including detailing where the value comes from, as far as I can tell, that allows them to make seven figures.

Some of the information I will review about these bloggers is from a report available from a tool called SEMRush, which is used to determine, among other things, the value of the search traffic estimated to be going to a domain. SEMRush’s traffic value estimate is a data-driven guess at how much the website would have to pay in Google AdWords to attract an amount of traffic that’s equivalent to what the site is getting from organic search traffic.

Depending upon how good you are at monetizing your traffic as well as the type of traffic you’re getting to your website, from what I’ve seen of bloggers who actually share information about how much they are making, it’s pretty common that bloggers have a monthly income that’s at least half of the traffic value estimated by SEMRush for their US-based search traffic. That’s not a hard rule, but it’s a benchmark I’ve seen often as I’ve researched bloggers’ domains through SEMRush.

Steve Chou is a former engineer whose story involves finding a way for his wife to quit her job and stay at home with their first child in 2007. Less than ten years later, in 2016, Steve and his wife crossed the seven figure blogger threshold when his site, which was named after the experience of transitioning his wife from employee to co-business-owner, surpassed $1M in income.

Chou published a blog post several years ago, which he updates from time to time with more recent numbers, in which he says he made $1.4 million in income from his blog in 2017. I’d guess he’s hit or exceeded $2M by the end of 2019. 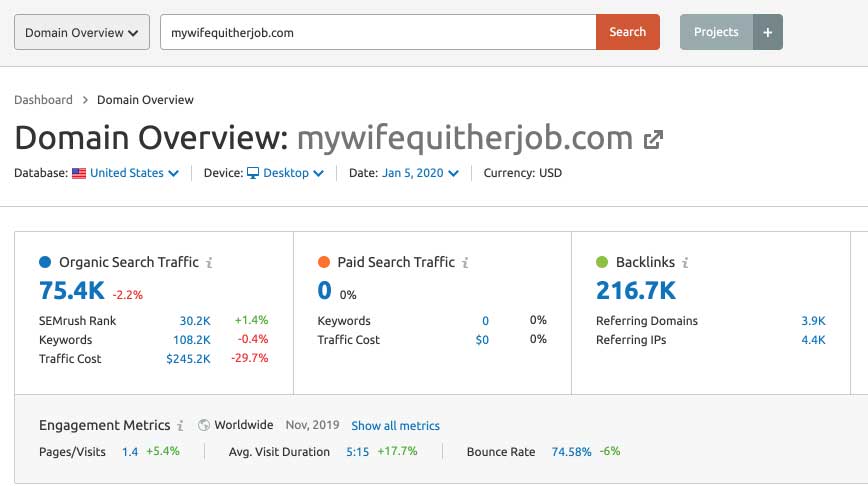 In his income report post, Chou gives some context that is inspiring. He explains that during the first two years of operating his blog, he was essentially writing content to a small audience. Most wannabe bloggers give up before even one year of seeing results. What very often happens with Google is that they don’t really start to trust your website enough to send the amount of traffic that will really drive commissions and ad revenue until about two years after you’ve started writing consistently.

SEMRush estimates (as of January 2020) that Chou’s US-based organic search traffic is worth $245,200 per month.

I don’t know this blogger personally, but one of my friends who knows him has commented to me a few times over the past several years updates about his progress. Hearing how well he is doing has made me feel like I should have been much more consistent about publishing content on my own blogs several years ago. Instead I’ve only recently become serious about making that (passive income from a niche blog) my livelihood.

Dahle doesn’t provide an income report or even a number for his blog income, but he did write a post in 2018 explaining what it’s like to be a seven-figure earner. Previous to reading that post, the last I’d heard from my friend, who I’ve been helping with his own blog, is that he was making the same amount blogging as he made at his job as an emergency physician. 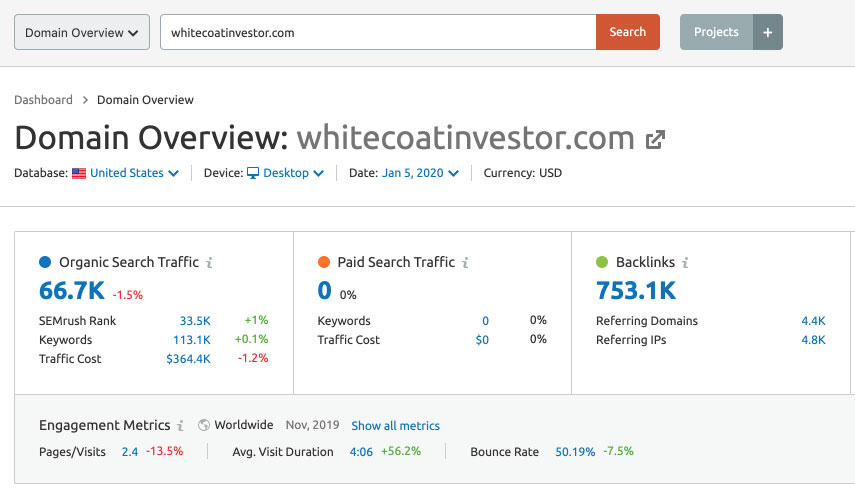 SEMRush reports (January 2020) that Dahle’s US-based search traffic is worth $364k per month. If he’s monetizing his traffic at an average pace for bloggers, he’s probably bringing in about $150k per month.

I have worked with some of Jill’s relatives on a project for which we inquired about advertising on her website. The price tag was high. She obviously gets a lot of traffic, enough that even a single promotional blog post costs in the thousands of dollars range.

Jill’s story is an amazing and inspiring one. She started blogging as a therapeutic response to depression. She was told to write something good every single day.

And it has paid off, in more ways than one. From everything I can see, including having her very own Amazon influencer shopping page and monetizing her social media accounts well, I’d guess that she’s making at least $250k per month, or $3M per year. Nice work, Jill! 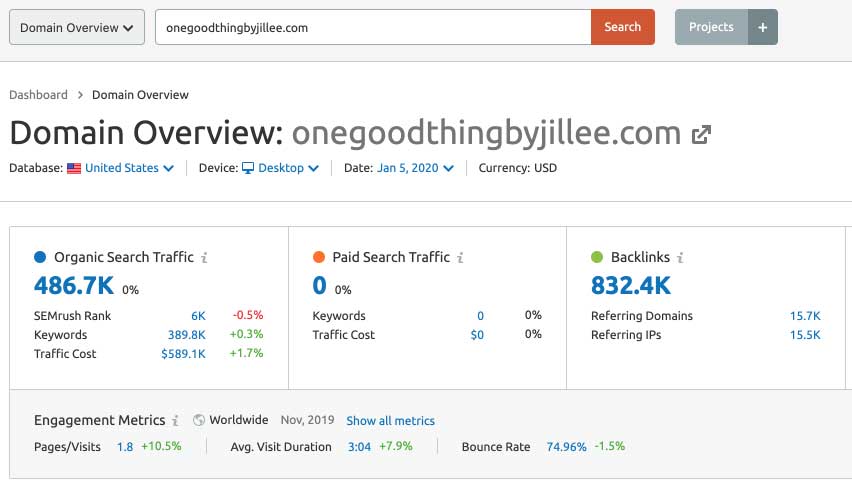 The current SEMRush report for OneGoodThingByJillee.com puts her at US-based traffic estimate at $589k per month.

My own story is still in the making, but my intent is to come back here in the next six months and update this post with new information about having reached the tens of thousands of dollars per month in blogging income. I’m guessing it will take me a few more years to become part of the seven figure club, but success tends to beget success. Unless someone turns off the internet or I become distracted by something else that it feels like life, my wife, or my kids are calling me, I hope to break the seven-figure mark by at least 2025. 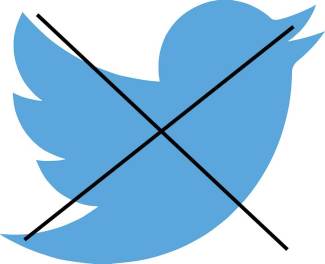 How to Start an Amazon Business 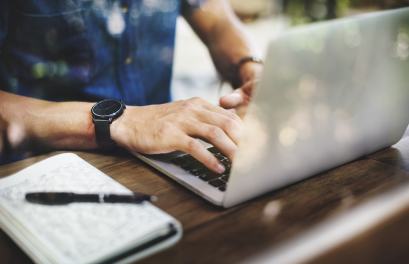 How To Start An Online Business 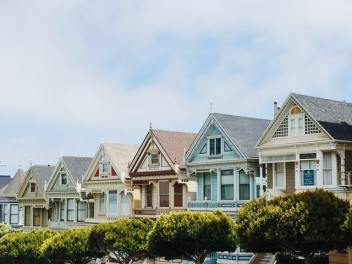 Pros and Cons of Using a Property Manager for Nightly Rentals