Doing more is a popular thing these days.

The more motivated segment of the population seems to always be looking for ways to do more with less, to make the most of each day, each hour, each minute. Programs abound to help you be healthier, wealthier, smarter, more spiritual, more disciplined…better all around.

Well, I’m going to introduce you to a popular method for doing time management and increasing productivity that was introduced in the early 2002’s by David Allen, a productivity consultant whose biography includes everything from being a heroin addict to glass-blower to magician to ordained minister in the Movement of Spiritual Inner Awareness.

Allen’s productivity movement is called Getting Things Done (often abbreviated GTD), and is described in his 267-age book by that name, which was first published in 2001, with revisions (adapting the methodology to evolving technology) made as recently as 2015 as of the time I’m writing this article.

Before I get into the details of the Getting Things Done methodology, I should note that while David Allen’s track record for helping people be more productive is highly commendable, his colorful past highlights the importance of not only being productive and getting things done, but also choosing the best things to get done. He’s now married to his fourth wife, which can make a person conclude that if getting married for the long term (which marriage should be) is on his priority list, he’s not been very successful.

I’ll just say here that for me, getting the right things done means to not only be successful in my career, learning and applying the skills I need to make money and thrive financially, but to be efficient as a father and a husband so that your wife and kids get the most benefit out of your existence. Getting the most important things done (like family and relationships) is more important than just getting things that are less trivial done.

With that said, we’ll continue and discuss David Allen’s Getting Things Done productivity method with the understanding that we know what are the most important things to get done.

I’m going to summarize the Getting Things Done methodology and explain the steps involved in the that methodology, but I know some people like to watch rather than read (probably a bad habit generally, but understandable).

So, if you’d rather just sit back and eat your lunch or otherwise relax while you learn about Getting Things Done, here’s your chance.

The Getting Things Done methodology is built around the concept of reducing stress and wasting time and energy on what David Allen sometimes calls “open loops”, which are potential responsibilities that can not or should not be handled immediately, but that cause stress and frustration as the mind worries about not having a system in place to classify and handle those things.

The Getting Things Done solution for minimizing stress and maximizing productivity  consists primarily of using five steps to “apply order to chaos”. Those steps include:

Step 2, Clarify: Process what it means: Here you are going to make a decision about the things that are vying for your attention that you captured in step 1. You will decide if each of those things is actionable or not. If an item is not actionable, it should be thrown away, filed away, or otherwise set aside to mature. If something is actionable, it should either be done, assigned to someone, or deferred intelligently until another time.

Step 3, Organize: Put it where it belongs This step involves creating a system for dealing with things you are not acting on now. Setting up reminders to do actions that have been deferred based on the clarify step allows you to intelligently stay on top of what needs done and not worry about things falling through the cracks.

Step 4, Reflect: Review Frequently It is understood that in a dynamic world, priorities change. Obligations can be accelerated on one hand or become obsolete on another. This step involves a weekly review to essentially get caught up on the current state of your productivity.

Step 5, Engage: Simply do This is the work part of the Getting Things Done methodology. If one of your tasks is to pay a bill, mow the lawn, or read a book, you must actually do that thing. Productivity and getting things done are obviously highly dependent on doing things. 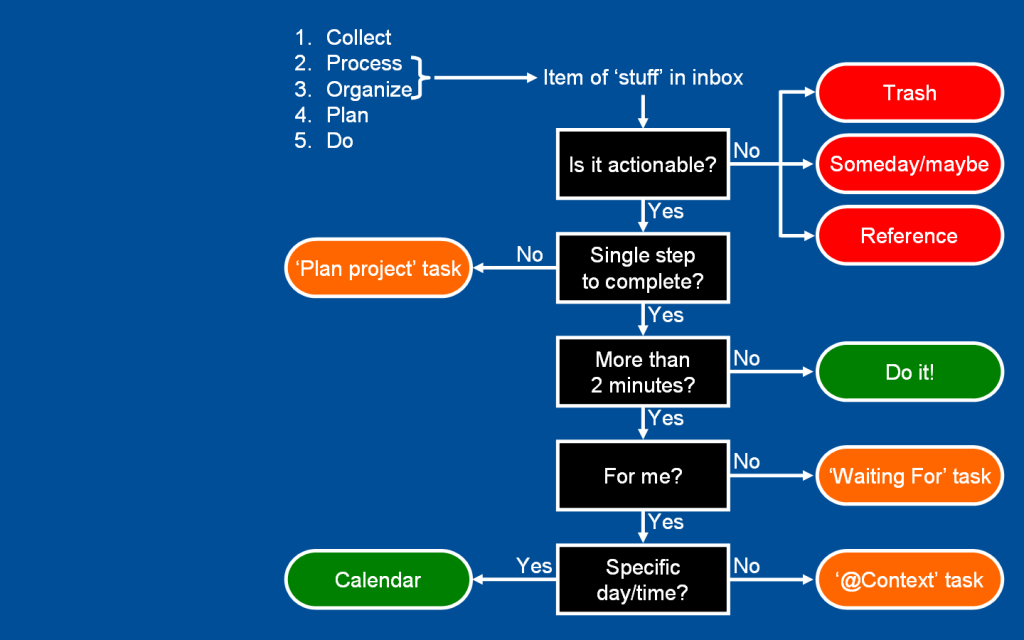 Learning More About the Getting Things Done System

The introduction and summary I’ve given here should help you understand the Getting Things Done methodology well enough to determine whether this take on productivity will work for you.

Most people need more than just a few details to improve their productivity to the level they desire.

If you’d like to learn more about the details of all of the Getting Things Done steps and become more educated about how it works, including seeing examples of others who have used it, you can purchase and read the book.

Products (software, planners, other helps) have been developed to make it easier to follow the Getting Things Done system. Official GTD products are available from the online gtd shop. There are also lots of other tools made by outside companies available on Amazon and elsewhere.

The next level of support beyond education for both individuals and organizations is to buy and schedule training. The GTD organization has created a network of coaches and training opportunities, offering certified GTD coaching, access to certified partners, and training courses for people at various levels of mastering the methodology.

Most of the publicly and privately offered training courses are single-day events that focus on various aspects of the methodology. For many people, fully implementing the GTD system requires some degree of support and reinforcement, since they are having to abandon long-held habits in exchange for more effective lifestyles.

Tools for Implementing the Getting Things Done Methodology

To be effective at introducing this Getting Things Done productivity methodology into your life and habits, it’s most often useful if you have a support structure, including a technology system that helps you implement the organize step.  I’ve written about how my family uses Google Calendar to try to keep ourselves caught up.

Productivity software is only as helpful as your commitment to using it. There are likely millions of abandoned or inactive accounts on Trello (I have about ten of them, one for each of the businesses I’ve done consulting for, and a few personal ones) that were set up by people with good intentions, but bad long-term vision and execution.

You’ll likely need some kind of planner (physical or digital) and something to keep track of checklists (again, it can be physical or digital). Digital products tend to be more popular because of how easy they are to use and because they’re normally integrated into your phone or another device you’re already used to using.

There are several different options you can use to set up your own version of the GTD framework. A Trello blog post specifically describes how to use their software to implement GTD. There are lots of other competing and supplementary products that provide detailed explanations of how they can be used to implement GTD.

To help you get started out and give yourself the best chance of succeeding with the Getting Things Done system, I’d recommend watching a video or reading an article that shows how someone has implemented their own GTD system, and mimic whichever one you think best fits your personality and approach. For example, an article I found on Lifehack about someone’s approach to GTD explains all the details of which products the author uses to setting up a robust system, including using your email inbox, a list software called Remember the Milk, a mind mapping tool called FreeMind, Google Calendar for scheduling and calendaring, and Dropbox for storage.