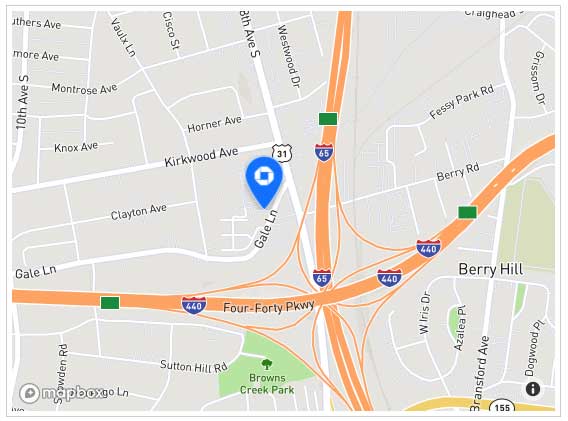 I recently moved from Utah to Tennessee, and I found out several months ago (while looking at getting a cashier’s check from a Chase Bank location close to Nashville) about my banking situation that I hadn’t considered. It took me by surprise.

Updated January 2020: Chase has now opened a bank branch on the corner of Berry and 8th Avenue near where I-65 and I-440 meet on the south side of Nashville!

Also, to stay updated on new locations in the Nashville area, you can use the Chase Bank branch locator tool.

In fact, to find the nearest Chase branch to Nashville, you’d have to travel north just over an hour (Google says it’s 1 hour and 9 minutes to be more precise) to the Chase location in Bowling Green, Kentucky.

The closest Chase branches to Nashville heading south are in the Atlanta, Georgia area.

I’ve always thought that the biggest bank in the United States – Chase beats out Bank of America, Citigroup, and Wells Fargo as the bank with the most branches, over 5,100 as of 2019 – would have branches in every state, but that wass apparently a bit naive of me. Although Chase has ATMs (or partner ATMs where Chase account holders can access benefits associated with Chase) throughout the entire United States, as of now the banking giant has no presence in Tennessee as well as 18 other states, including New Mexico, Montana, Wyoming, North Dakota, South Dakota, Minnesota, Nebraska, Iowa, Kansas, Missouri, Arkansas, Mississippi, Alabama, South Carolina, North Carolina, Vermont, New Hampshire, and Maine.

Check out the map below to get a better geographical feel of where in the United States Chase Bank has locations.

Why I Originally Chose to Bank with Chase

Several years ago when I was operating a business in Utah, I ran into some issues with my local small (and very friendly) bank. I was operating an online store, and it made sense for me to accept wire transfers from customers in Europe and elsewhere. My local bank rejected several incoming wires because there was something lost in translation between my customers’ originating bank, the intermediate bank, and my bank (the Bank of American Fork, one of the largest small banks in Utah).

To solve the problem, I knew that I needed to set something up with a larger national bank. Chase’s banking options (including business checking accounts from which I could easily send and receive wires) fit what I needed, so I went with them. I never considered at the time that if I moved anywhere else in the country, there might not be a local Chase branch location that I could drop into when I needed something specific.

Alternatives to Chase for Banking in Tennessee

Depending on what you’re looking for, there are several other alternatives to Chase that you can use in Tennessee if your banking requires you (as with most people who keep their money in a bank) to visit a local branch. It tends to be very frustrating to use a bank that doesn’t have a local presence in the area where you live.

I couldn’t find a Citi branch in the Nashville area, but there are lots of Wells Fargo and Bank of America branches here. There are also lots of medium sized banks that offer many of the same services that Chase and the other national banks offer. Those banks include:

If you’ve moved to Tennessee or spend a lot of time there that requires you to do a significant amount of banking, you might consider going with one of these alternatives. Based upon your specific banking needs, you’ll likely find one among those I listed that will give you a place to walk into and talk to a person to get help on any particular business day.