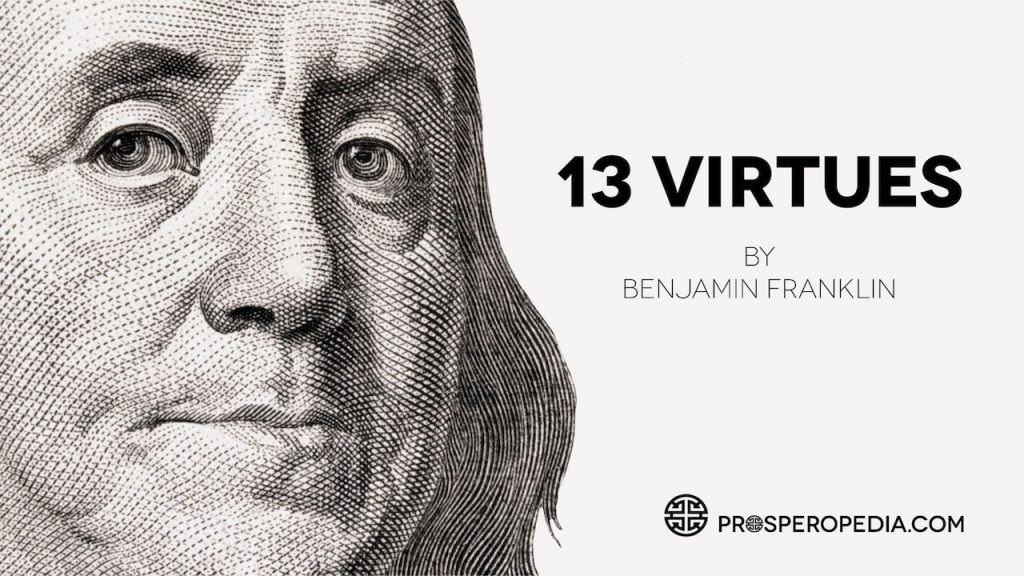 In fact, much of the good we enjoy in modern society (both in the United States and across most of the world) – including everything from contributions Franklin made to modern electricity to his perpetuated ideas about the role of government and the importance of individual freedom, liberty, and self-government – can be traced back to Benjamin Franklin’s brilliant mind and assertiveness.

One of the valuable nuggets of Franklin’s legacy is a set of 13 virtues he thoughtfully identified as being those that are of particular importance for a person to achieve productivity, prosperity, and a life of fulfillment. Included with each of his 13 virtues was a “short precept” that gives context for the virtue.

In Franklin’s autobiography, he gives some context behind the 13 virtues displayed below.

I included under thirteen names of virtues all that at that time occurr’d to me as necessary or desirable, and annexed to each a short precept, which fully express’d the extent I gave to its meaning.

Once he’d settled on his what would be included in his set of  virtues, Franklin went through a process of evaluating himself on each of the virtues successively in an attempt to perfect himself in regards to living the virtues and their associated precepts.

Benjamin Franklin’s 13 Virtues are presented here for your use and benefit.

In his autobiography, Benjamin Franklin details his efforts to live by the 13 virtues that have been made famous by him.

Regarding his efforts to master the virtues on his list, Franklin admitted later in life that he thought himself successful on all but the last virtue, humility. That virtue, which a Quaker friend had suggested he add to his list, is one that tends to work against itself, since it is human nature to be prideful about accomplishments.